The Racing Life Of Frankie Dettori - The Scourge Of The Bookies 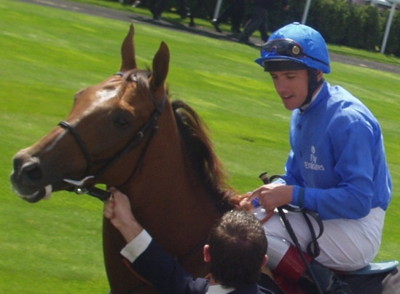 Few individual people have cost bookmakers as much money as Frankie Dettori. The diminutive Italian is best known for winning what became known as the Magnificent Seven, when he won all seven races in one day at Royal Ascot and made himself the villain of bookmakers all over the land.  He hasn't done it just once either on several occasions he has dominated meetings and in the process elevated average horses to greatness.

Yet what is it about the Milanese born rider that made him such an evergreen jockey? Is there something about him that means he’s been able to cause bookies so much trouble when compared to other riders in the business? Even greats like Lester Piggott think he’s one of the best jockeys in the business, so we’ll try to explore why on this page. 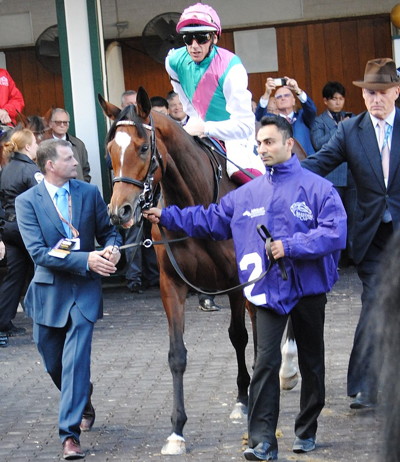 Born as Lanfranco Dettori in the Italian city of Milan on the 15th of December in 1970, Frankie Dettori, as he’s better known is the son of Gianfranco Dettori, who was himself a prolific racer. Gianfranco was born in Serramanna, in what is now South Sardinia and during his career he was named the Champion Rider 13 times. Whilst mainly known for his wins in Italy, he did win the likes of the 2,000 Guineas in the United Kingdom.

Racing was very much in Frankie’s blood, therefore, but his father did his best to encourage this out of him; when he turned twelve Gianfranco bought him a Palomino pony, which he rode often. He them left school at thirteen to become a stable boy as well as an apprentice jockey. Within a year he moved over to the UK, working with Luca Cumani at Newmarket.

By 1990, aged just nineteen, Dettori became the first teenager since the aforementioned Lester Piggott to win 100 races in a single season. His first ever victory had come in Turin in November of 1985 when he was sixteen, whilst his first victory on British soil came in June the following year. Soon he backed that up win wins in Group 1 races, making a name for himself.

If Dettori was already something of a well-known figure in racing by the mid-1990s, his face was about to go astronomical. On the 28th of September 1996, Dettori was down to ride seven different horses on British Champions' Day at Royal Ascot. The idea of him winning all seven was thought to be virtually impossible, akin to a golfer hitting eighteen birdies.

Dettori, though, isn’t a man to worry about what is and isn’t possible and so he simple mounted each horse and won each race one after the other. In doing so he defied cumulative odds of more than 25,000/1 and left bookmakers reeling. Indeed, in the case of Gary Wiltshire he cost him £1 million and nearly made him bankrupt, having to sell his house to pay his debts.

The Italian has had ups and down since then, not least of which came in 2000 when he was on board a Piper Seneca that crashed when it was departing Newmarket on the way to Goodwood, killing the pilot and injuring Dettori’s ankle and thumb. He was lucky to survive and spent a couple of weeks recovering in hospital.

Another low came in November of 2012 when he was handed a six month suspension from riding after testing positive for a banned substance that was believed to be cocaine. It wasn’t all that shocking to the rest of the horse racing world, given that Dettori had admitted to using diuretic drugs before they were banned by the Jockey Club in 1998.

Dettori has seemingly always been in the public eye, using his larger-than-life personality to ensure that he was regularly offered media gigs. He was one of the captain on the BBC’s Question Of Sport quiz show before quitting to concentrate on his riding career. He has also put his name to frozen foods and restaurants, working with Marco Pierre White.

A renowned Anglophile, Dettori is an Arsenal supporter and is married with five children. His list of winners in the world of flat racing is like a list of the most important races in the industry. From the 1,000 and 2,000 Guineas through to the Derby and the King George VI and Queen Elizabeth Stakes, there’s barely a race worth knowing about that he hasn’t won in his career.

What Makes Him A Different Class Entirely? 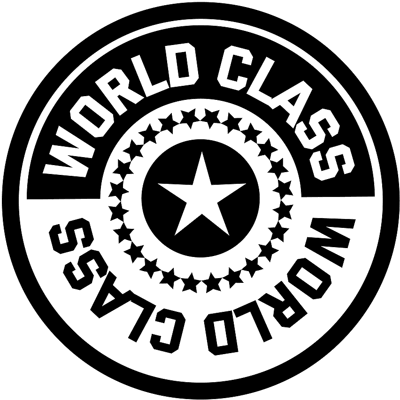 Discussing what makes someone great at what they do is a tricky thing to get in to. What made Lionel Messi the best footballer the world had ever seen? Why was Tiger Woods so phenomenally brilliant at golf? Obviously dedication to their craft is high on the list, but there’s also an extent to which some people are just innately brilliant and the practice merely perfects that.

It also helps, of course, when you’ve got backers that can provide you with the best materials. In the case of Frankie Dettori those materials are the horses that he races on, whist the backer has been His Highness Sheikh Mohammed bin Rashid Al Maktoum. Dettori has ridden for the Godolphin stables for years, earning them countless winners.

It’s clear, then, that Dettori has been given advantages that other jockeys haven’t been handed. Yet there can also be no argument over the fact that he’s a phenomenal rider in his own right and not just because of the horses he’s been given to ride. He boasts a grit and determination that has seen him able to remain near the top of flat racing for several decades.

The Scourge Of Bookmakers

Being a great rider is in and of itself a remarkable feat, but what Dettori does that sets him apart from others is anger the bookmakers every chance he gets. As one of the all-time great flat racing jockeys, Frankie Dettori is known by almost everyone, irrespective of whether they like horse racing or not. That’s because he wins so often he’s always making headlines.

In a career that has spanned nearly four decades, Dettori has won every British Classic there is to win at least twice. The most obvious success that turned bookmakers sick came in 1996 when he completed the ‘Magnificent Seven’ and won all seven races on the card. That isn’t the only time that he’s punished bookmakers, however.

One such example can be found by looking through the results at Ascot in 2019, with Dettori winning the first four races of the day at the famous course. Having been there, seen that 23 years earlier, bookies slashed the odds of him winning as the day progressed. Having won the first four, he was clear in front with two furlongs left in the fifth race before eventually being caught.

Things would have been much worse for the bookmakers had Dettori not just missed out on winning the fifth race of the day, with one bookie suggesting that him finishing second was ‘the biggest swing in recent history’. Had he won all six races that day he would have cost the bookmakers in the region of £180 million, so you can see why they don’t like him much.

Even without those last two races, a representative of Ladbrokes described it as a ‘bloodbath’, saying that it was a ‘shocking result’. The winning streak had cumulative odds of 449/1, so the bookmakers once more took a pasting at the hands of the diminutive Italian rider who was presented with the Gold Cup by Her Majesty The Queen.

Whilst things weren’t quite that bad in 2020, the Royal Ascot meeting’s final day featured eight races, of which Dettori won three. Despite the racing being behind closed doors, the Italian still displayed his trademark flair and verve in winning the three races. They also allowed him to pip Jim Crowley to be named Champion Jockey, which the bookies had at a 20/1 possibility on the morning of the races.

Whilst Frankie Dettori’s career has seen many winners come thanks to the training of the team at Godolphin, not all of them have been part of the Katoum family’s stables. Equally, not all of his biggest wins have come on British soil, with Dettori also winning the most prestigious races in countries such as France, the United State of America and Dubai, too.

The list of significant horses that he’s worked with is a long one, so rather than look at every single one of them individually we’ve instead decided to pick out some of the more notable ones and explain why they’re on the list.

Foaled on Valentine’s Day in 2004, Authorized was an Irish born and British trained horse who was destined for greatness on account of Sadler’s Wells being his Grandsire. Trained by Peter Chapple-Hyam, Dettori rode the horse for the first time in the Group 1 Racing Post Trophy in 2006. Despite the heavy Going, he won at odds of 25/1.

It was the start of a beautiful relationship, with 2007 proving to be the key year of the horse’s career. Under Dettori’s guidance he won the Dante Stakes at York Racecourse and also saw the Italian win the Epsom Derby for the first time in his career. The pair also won the International Stakes together that year.

Though Balanchine was far from the most successful horse that Frankie Dettori has ridden in his career, she will certainly be one that the Italian will always remember fondly. That because it was on the back of the chestnut filly that he won his first ever British Classic. That was the Epsom Oaks, which she crossed the line victoriously for him in 1994.

The Epsom Oaks win was an impressive one, also being the first Classic win for Godolphin, but it was her win in the Irish Derby that really set her apart. That race is typically dominated by colts and it was a strong male field that she was up against, having to fight hard to push King’s Theatre, who had won the Epsom Derby, into second place.

This list of horses is in alphabetical order rather than order of importance, which is important to point out because of it had been the latter then Enable would have been right at the top of the list. The bay filly only won one race as a two-year-old, but in 2017 she emerged to be on the most successful middle-distance horses in the business.

In his first ride on her he won the Cheshire Oaks at Chester Racecourse, then he won the Epsom Oaks and the Irish Oaks at the Curragh. After that it was the King George VI and Queen Elizabeth Stakes at Ascot for the pair, then the Yorkshire Oaks at York and the Prix de l'Arc de Triomphe at Chantilly Racecourse. Unsurprisingly, she was named the Champion Three-year-old Filly and Horse of the Year.

A horse with a name like Stradivarius better be a winner for fear of being done under the Trades Description Act otherwise. Foaled in 2014, the chestnut stallion was born in Ireland and trained by John Gosden. Though the horse’s relationship is far from exclusive with Dettori, there’s no argument that the pair have been anything other than successful together.

The list of races that Frankie Dettori has won on the back of Stradivarius is as follows: 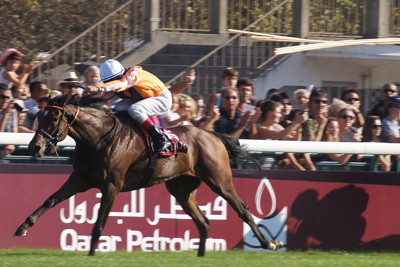 As with the horses, there are far too many races under Frankie Dettori’s belt to name all of the ones that he’s won over the years. Here, though, is a list of the most famous ones that he’s been victorious in at least once during his career: